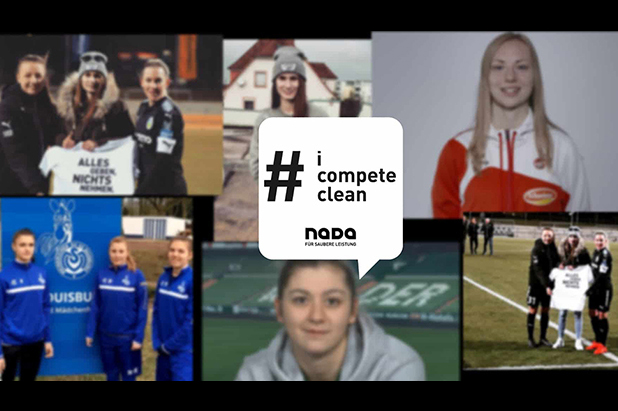 "#icompeteclean - I practice my sport cleanly." Behind this statement players of the Allianz Women's Bundesliga unite from Bremen, Duisburg, Cologne, Frankfurt a.M. and Munich. The players set a strong sign for fair competitions and honest wins. Doping is not an option for them. The players make this clear in video statements and join the movement for clean sport by signing the initiative shirt.

"I am for clean football, because doping has no place in sport", confirms Lena Pauels, player of SV Werder Bremen and junior national goalkeeper:

National player Sara Däbritz, who plays for FC Bayern Munich in the Bundesliga, is flying the flag for pure performance (see gallery).

With their signatures on the initiative shirt, Marith Prießen and Tanja Pawollek from 1. FFC Frankfurt are also part of the movement for clean sport (see gallery).

Meike Meßmer of 1. FC Cologne also stands up for a fair competition to preserve the integrity of football with her statement:

The campaign was initiated by the former soccer player Katharina Birtner, who set off on her way through the women's Bundesliga in order to unite the players and clubs for a common commitment to clean women's football. Thank you very much for your strong commitment, Katharina!

With her signature on the initiative shirt, the players are now part of the movement for clean sport.

At the DFB Women's Cup Final 2018 in Cologne, the players Meike Meßmer and Katharina Birtner took the opportunity to visit our live tool for the campaign “GIVE EVERYTHING, TAKE NOTHING" and set an example for pure performance. More about the event and some impressions can be found here: "GIVE EVERYTHING, TAKE NOTHING" at the DFB Cup Final of the Women 2018 in Cologne.

You can auction the shirt here [LINK].